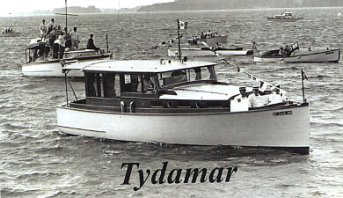 By 1930 the Elco Cruisette had been one of the most popular Cruisers for some 19 years.  They were handsome, seaworthy and speedy.  At 35'in length with a beam of 10'3", draft of 2'9", speed of 15-17 mph and a cruising range of 150-225 miles, the Cruisette was a marvel of comfort.  Appointed with and twin cabins, white oak keel and frames, planked with cedar, cabin trunk and trim in varnished mahogany, white sided with brass brightwork, they were also beautiful.

The Elco Works of the Electric Boat Company of Bayonne New Jersey had been building motor boats, motor yachts, and electric boats since 1892.  On October 30th, 1930, they were commissioned to build a 35' Cruisette for the Arnot Rathbone family of Elmira New York.  She was named Joy-Jack after the Rathbone children.  Joy-Jack was delivered on May 6th, 1931.

The Rathbone family cruised the waterways of New York and Canada until the son, Jack, a fighter pilot, went to war.  The survival rate of fighter pilots was dismal and mistakenly anticipating that his son might not survive the war, Mr.Rathbone sold Joy-Jack in 1943.

Professor Everett Strong purchased her and renamed her "Sabbatical".  Strong, instructed the navigation and compass courses for the Coast Guard Auxiliary and Power Squadron (he installed a B-29 bomber compass and built a sun compass which was used to calibrate the boat's compass).  Professor Strong sold "Sabbatical" in 1948.

The next owners, the Bruce Murray family, changed the name to Tydamar, a combination of the children's names.  During the many years Tydamar cruised the canals, rivers, lakes and waterways of the Trent Sevem and Thousand Islands of New York and Canada, the Elco became a familiar "face" and made many friends.  Manifold problems put the boat out of service.  The Murray family could not locate replacement parts for the Buda Engine and decided to trade her for another boat.

We purchased the boat in 1962 and re-powered it with a 165 hp Gray with reduction gear, the difference in weight between the original Buda 100hp engine and the Gray was compensated for by adding lead ballast to the bilge and forward bulkhead areas.  By not changing the name, we inadvertently inherited many of Tydamar's friends.  The moment we would dock, someone who knew the boat would come up and introduce themselves.  Our circle of friends expanded exponentially.  They would suggest places to visit, how to get there, where to anchor, .help us mark our charts, advise where to shop, or get fuel.  It was fun to observe our children getting acquainted with new friends and through the children, we became friends with the parents.  After 40 years, these friendships still exist.  We seldom had a problem finding a dock, there always seems to be space for one more boat.

Up to the 60's, "home" territory was Cayuga Lake, one of Finger Lakes on New York State's Canal System.  We had secured permission to drop buoy moorings (semipermanent "anchors" with chains leading up to buoys that could be attached to a lines from the boats) adjacent to lake front homes of friends.There were five buoy moorings around Cayuga Lake that were layovers.  Several boats had permission to moor, but during the 60's pleasure boating became very popular and unauthorized moorings and related problems caused the property to remove the buoys and drop the chains to the bottom of the lake.  It was back to anchors instead.

The original dinghy, a 7'6" Penn Yan, had long ago been replaced with a series of "rum runners" (boats used to ferry supplies, transport people, etc. from the Elco to shore), first a Chris Sea Skiff, later a Lyman Islander, then a Penn Yan Swift and many more, usually 16-18'.  Tydamar was usually in service in the Finger Lakes but in August we would take her to Clayton on the St. Lawrence River.  The current "rum runner", was trailered to Clayton, launched and taken by the kids to scout whatever destination in the Canadian Park Islands we planned to explore.  At that time, there was no charge to visit park islands, and there was a 48 hour dock limit.In other words,you could stay at that particular dock for 48 hours then you had to move on.

There were 36 Canadian Park Islands, so there was never a shortage of parks to explore.The kids would take the "rum runner" and scout out the next island, report back by CB radio,we would follow the children.If no dock space was available, we would simply drop the stern anchor and tie a bow line to a tree or rock.When dock space became available, we would move Tydamar to a dock.  The children were never bored, and of course, if the kids were happy, everyone else had a good time.  The boys purchased a tent and would set it up as soon as the Elco was secured. 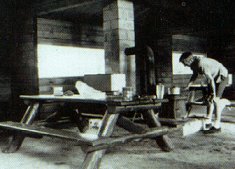 Many of the park islands had provided wood stoves and small pavilions, and we usually cooked on shore to keep the boat cool.This seeming insignificant practice born out of necessity inadvertently started what was to become a large weekly gathering for a Sunday morning pancake breakfast ritual that was to last for decades.  These included not only boaters from the U.S.and Canada but park rangers and staff and people from several foreign countries who would rent boats when they arrived... just one big international family. 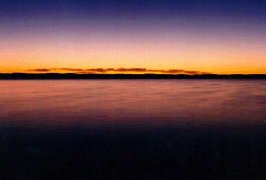 At a very young age, the children had learned boating safety, how to read a chart, steer a compass course, tie a line, rig a fender and how to care for the dinghy.  The Tydamar had port and starboard helm seats with two large chart tables, we ran compass and log day and night,had speed curves for the engine enabling us know hull speed at all rpm's, and chart plotted directions.  A dime on the chart was moved to indicate the Tydamar's location,we always knew where we were.  If there was bad water or weather we ran two sets of charts; one person running the boat,everyone else watching the terrain, islands with pine trees tended to look alike, compass courses would take where you intended to go safely and easily.  In 30 years of traveling the Thousand Islands and Rideau, we never hit anything, ("lots of close calls though") 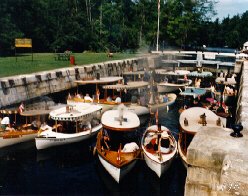 Safety was always first. No one was allowed on catwalks while under way,  locking or docking. Locking is inevitability when you travel the waterways. For those of you who may be unfamilar with this procedure, I'll explain....Locks by-pass natural changes in terrain..,example waterfalls...traveling up or down river, a lock was built usually by the corps of Engineers to by-pass a waterfall. To transport a boat from one level of the river to the other, a lock would be closed (with you in it) then filled like a bath tub untill it reaches the same level as the upper portion of the river,as the water level rises so do you. The gate opened and you proceed on your merry way. The same is true if you are traveling down stream, you proceed into the lock, the gate is closed, the water emptied untill the water reaches the level of the river below, the gate is opened and you proceed out of the lock into the river. 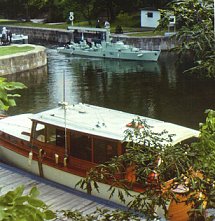 In locking the Tydamar, instead of fenders, three oak locking boards were attached to either port or starboard side suspended on hanger fittings.  Nylon lines attached to bow and stern stanchions held close at stem,and a person on the foredeck with pike pole to hold bow at a safe distance from the lock wall.  As the water level rose or fell, line was adjusted out to hold boat in safe position.  Several boats lock at the time and frequently boats are rafted together.  We kept sharp knives fore and aft in case it was necessary to cut a line.

Standard equipment not only meant pots, pans and fishing gear, early copies of Rudder and Motor Boating dating from the1890-1950's.  Also history books on the Rideau, Trent-Sevem, St.Lawrence, Lake Champlain, and NY canals gave the children a sense of community history of the areas they visited.  I had personally learned from years on the road that if you want to enjoy a community, visit their local museums and Chamber of Commerce Offices first.

For several years Tydamar would be brought to Ithaca for winter storage, the current "rum runner" dinghy sold (money made from dinghy sale usually paid for years boating expenses), another would be purchased as a winter project boat to be restored for the next boating season. 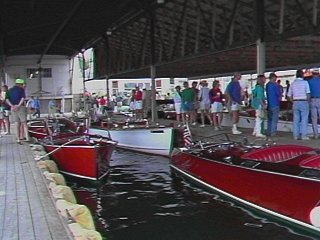 In July 1964 Tydamar went directly to the Rideau from Ithaca.  We experienced battery problems and contacted Tom Turgeon at Clayton to order a positive ground alternator to augment the existing generator which he offered to bring to Ithaca and install.  We headedback to Ithaca.Upon Tom's arrival he told us about an upcoming Antique Boat Show in Clayton and got Ed Weatherly, Ed Rumsey and Everett Strong to crew the Tydamar to  Clayton for the Show.The weather was miserable, nevertheless, we had a great time.Tydamar became Registry #21 of the Antique Boat Auxiliary (before there was a Museum at Clayton).The Clayton Show became part of our annual schedule. And for several years to come, Jack Rathbone, son of the original owner, skippered Tydamar in the Clayton Boat Show Sunday parade.

We moved the Tydamar's home port to Clayton for the next eight years, we drove up on weekends.  Tydamar became an impromptu PR boat; there was always a supply of literature on board on Chris Craft, Elco, Gar Wood, Lyman and Richardson.  Many exhibitors of antique boats at Clayton were not acquainted with the St. Lawrence or Rideau, so we kept material about Canadian and U.S. waterways, Mid-Lakes Navigation Co., museums, societies, the NY Canal system and other water-related organizations.

For 35 years, Tydamar was an intricate part of our family, the ACBS, Chapter formations, and the waterways of New York State, the Rideau and Trent-Sevem.  Since 1994 Tydamar has been in the very capable hands of Myndy and Katie Woodruff, her homeport is now Basin Harbor Vermont on Lake Champlain.  She continues to travel the waterways making friends.